The magic process of brewing the “liquid gold” begins in the malt house where the malt is prepared: barley grains are first soaked for several dozen hours to absorb water and bud. Budding then takes place over several days in a cold, dark place. Budding starts a complex biochemical process causing the release of major enzymes in the grains. These enzymes (alpha and beta-amylase) decompose complex starches to simple sugars in the course of brewing. The resulting sugars then produce alcohol during fermentation. The budding must however be stopped at an exact moment (usually after five to seven days) – this is achieved by malt drying. At this moment, the malt may also be roasted at temperatures high above 100°C, which produces dark malt. After this the malt ingredient is ready.

Now the malt is left to settle (for up to several weeks) and then (after the bud removal) carefully crushed in a grain crusher. Then the crushed grain is mixed with water in a process called mashing resulting in a pulpy mash. The mash is then heated for further split of complex to simple sugars. Then the liquid is separated from the solid component of the mash (mashed malt). The filtered solid component is called spent grains and the liquid component is wort, a pleasantly sweet solution – the basis of future beer.

Now the wort must be “spiced” with hops to achieve the desired aroma and the typical bitter taste. Hops (in the form of granules or extract) are mixed in the wort over several stages and the mixture is boiled for an hour or two (hops boiling) to transfer to the wort all the noble substances through heating to a high temperature. The boiled wort is filtered and ready for cooling.

After cooling to achieve the temperature for fermentation (8-11°C for bottom fermentation, see below) yeast is added and the key stage – fermentation – begins. Fermentation (of tap beers) usually takes 7 to 9 days, or up to 14 days in the case of special beers. Clearly the longer the fermentation, the more alcohol is produced. The gas, CO₂ (carbon dioxide), generated by fermentation, is not released into the ambient space, but is collected and later used as the push medium in further handling of the beer. 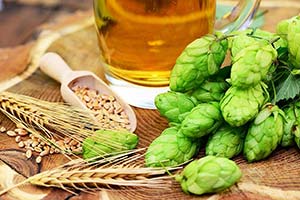 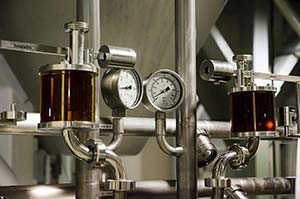 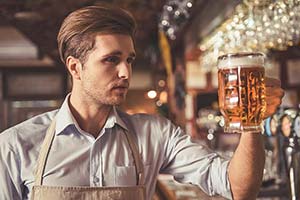