The Hostivar Brewery was founded in 2011, but the first batch was brewed in February 2013, while the brewery restaurant opened in April of the same year. The Hostivar Brewery is shareholder owned, in this case owned by nearly 90 small shareholders, mostly neighbors of the surroundings and their friends.
Another interesting point of this microbrewery is that even though it’s named Hostivar, it’s located just outside the city of Hostivař, already on the territory of Horní Měcholupy. The building was built on a “green field” between the streets of Hornoměcholupská and Lochotínská. The combination of wood, glass, and concrete with a large adjoining garden is the work of ADR architectural studio. It was awarded honorable mention in the new building category of the Grand Prix of Architects 2014. The microbrewery technology was supplied by Strojtep from Jeřišno near Chotěboř.

Brewers Jan Tržil and František Poláček brew 4 types of beer in a glazed 10hl boiler as well as a few specials each year. The standard selection includes 11° and 13° light, 12° semi-dark, and 15° H-Ale. The first “Special” was the 8° Cycler, which has become a summer tradition, followed by Wheat, 14° St. Martin Ale, and the traditional 17° Advent Doppelbock. Other specials that have appeared during the less than three years of the brewery’s operation are the 13° Dark, 14° Annual IPA, 10° Ale Letňák, Witbier, and Stout.

The microbrewery sells nearly all of its current production (around 2,000 hl/year) in its own restaurant with a covered terrace, extended in the summer by an outdoor bar in the brewery gardens. A small part of the production of beer is sold in one-liter PET bottles. 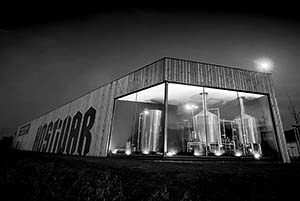 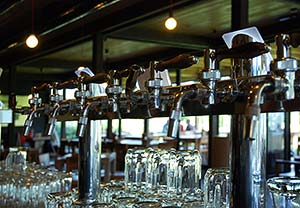